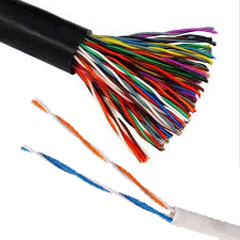 CAT3 Telephone Cable (UTP) stands for Unshielded Twisted Pair cable designed to reliably carry data up to 10 Mbit/s, with a possible bandwidth of 16 MHz. It is part of a family of copper cabling standards commonly used everyday that also includes CAT5, CAT5e and CAT6. Category 3 was a popular cabling format that was used for Voice and Data for years. Cat 3 is currently still in use in two-line telephone systems as Millions of Homes and Offices are still wired with CAT3 for Voice and Technically, the trunk and distribution cable used by the Telephone company to get to your home or office from their Central Office is CAT3 as well. Since the early 2000s most new structured cable installations are built with Cat 5e or Cat 6 cable as it can be used with Voice or Data without being "Stuck" later. We have Outside Plant (OSP) and Premise CAT3 cables for your long or short distribution needs.

UTP (unshielded twisted pair) cables are found in many Ethernet networks and telephone systems. For indoor telephone applications, UTP is often grouped into sets of 25 pairs according to a standard 25-pair color code originally developed by AT&T. A typical subset of these colors (white/blue, blue/white, white/orange, orange/white) shows up in most UTP cables. Typically, UTP would be used in an office setting.

FTP (foiled twisted pair) cable contains multiple pairs of copper wire enclosed in a sheath of aluminum foil. It's used in wiring systems in buildings or other environments where heavy noise adjacent to the wire might cause interference. The foil provides insulation not afforded by UTP (unshielded twisted pair), the most common kind of structural wiring. The disadvantage of FTP is that it requires somewhat more care in "earthing" (grounding) than UTP and electrical impedances must be matched when connecting to UTP. Typically, FTP might be used in a factory setting.

Solid core cable is supposed to be used for permanently installed runs. It is less flexible than stranded cable and is more prone to failure if repeatedly flexed. Stranded cable is used for fly leads at patch panel and for connections from wall-ports to end devices, as it resists cracking of the conductors. Stranded core is generally more expensive than solid core.

CMR - Cable meeting UL 1666, CSA FT4. This cable is used in vertical tray applications such as cable runs between floors through cable risers. Riser rated cable must self extinguish and must prevent the flame from traveling up the cable in a vertical burn test. Cable that is to be run between floors in non-plenum areas is rated as riser cable. The fire requirements on riser cable are not as strict. Thus, plenum cable can always replace riser cable, but riser cable cannot replace plenum cable in plenum spaces

CMP - Cable meeting CSA FT6 or NFPA 262 (UL 910). This cable can be installed in air plenums and ducts in accordance with NEC Article 800. A Plenum is a hidden space within a building which is used for HVAC (Heating, Ventilation, and Air Conditioning) Plenum cable is coated with a fire-retardant coating. Plenum cable must not burn easily and must not emit toxic fumes when exposed to extreme heat. Because of these requirements, plenum cable is more expensive than non-plenum cable. Plenum cable is jacketed with a fire-retardant plastic jacket of either a low-smoke polyvinyl chloride (PVC) {patented 1987} or a fluorinated ethylene polymer (FEP). Polyolefin formulations, specifically based on polyethylene compounding had been developed by at least two companies in the early to mid-1990s; however, these were never commercialized and development efforts continue in these yet-untapped product potentials. Development efforts on a non-halogen plenum compound were announced in 2007 citing new flame-retardant synergist packages that may provide an answer for an yet-under-developed plenum cable market outside the United States. All materials intended for use on wire and cables to be placed in plenum spaces are designed to meet rigorous fire safety test standards in accordance with NFPA 262 and outlined in NFPA 90A. Plenum-rated cables are restricted to only allow certain chemicals for manufacture of the wire insulation and cable sheath. Typically this results in reduced flexibility of plastic cables, making it stiff and hard to bend. The bend radius may also be increased, and tight bends can potentially crack or tear the insulation and sheathing.

CMXT - Cable meeting UL 1581, Sec. 1080 (VW-1), CSA FT1; Exterior Shielded cable is used in environments were extra protection from outside interference is needed. This can be heavy machinery, transformers, generators or other equipment that has a high degree of EMI. (Electro Magnetic Interference) .

A finished cable shall not propagate a flame or continue to burn for more than one (1) minute after five (5) fifteen (15) second applications of the test flame. There is an interval of fifteen (15) seconds between flame applications. The flame test shall be performed in accordance with Para 4.11.1 of Canadian Standards Association (CSA) Standard C22.2 No. 0.3. In addition, if more than 25% of the indicator flag is burned, the test cable fails. FT1 Cables can be used in Combustible buildings.

Is similar to the UL-1685 Vertical Tray Flame Test, but is more severe. The FT4 test has its burner mounted at 20° from the horizontal with the burner ports facing up. The UL-1685 Vertical Tray has its burner at 0° from the horizontal. The FT4 samples must be larger than 13mm (.512″) in diameter. If not, then the cable samples are grouped in units of at least three (3) to obtain a grouped overall diameter of 13mm. The UL-1581 Vertical Tray does not distinguish on cable size. The FT4 has a maximum char height of 1.5 m (59″) measured from the lower edge of the burner face. The UL-1685 has a flame height allowable up to approximately 78″ measured from the burner. FT4 Cables can be used in Non-Combustible buildings.

Products passing the FT6 Horizontal Flame and Smoke Test are designated FT6 in the column where the trade number appears. This test is for cables which must pass a Horizontal Flame and Smoke Test in accordance with ANSI/NFPA Standard 262-1985 (UL-910). The maximum flame spread shall be 1.50 meters (4.92 ft.). The smoke density shall be 0.5 at peak optical density and 0.15 at maximum average optical density.

This Site is Owned & Operated By 3 Star Incorporated located at: